I think they’re wrong and display a stunning lack of insight. In no particular order, I made a list of five reasons why lists have an inherent value worthy of poetry or prose or McSweeney’s.

“Blurred Lines” by Robin Thicke should be at the top of the list for disgusting, creepy, misogynistic pop songs, but if you think about your Mom shaking it to “Little Sister” by Elvis Presley you do gain some perspective.

Are you on the no-fly list? Then you can’t fly, Cat Stevens! If you have a problem with that, TALK TO THE LIST. The list lacks empathy and is indifferent to your plight because the list has been written.

Martin Luther nailed the 95 Theses to the church door and said, “Suck on this fucking list Catholicism!” After which, he created Lutherans. Pastel suits have been worn and parties have been stopped when the punch is spiked ever since.

Taxonomic rank, motherfuckers! List, what what! A hierarchy of authority for life itself. Try using the pick up line, “Hey baby, have you ever had an organism? What’s your phylum?” Make a list of reasons why you live alone in a basement apartment. 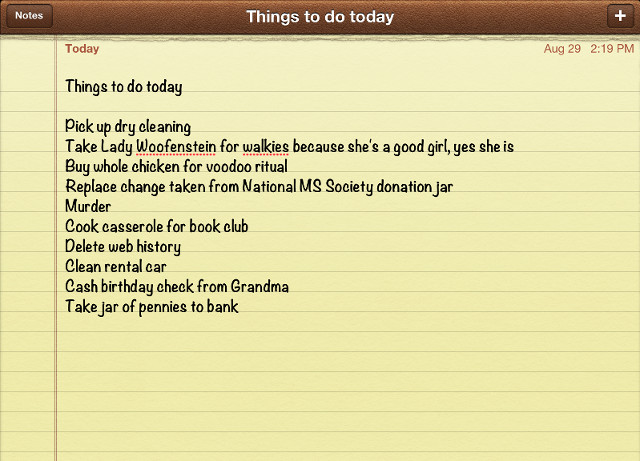