Back in my cinephile days, I used to go to this movie house on the outskirts of town called The Dreamathon. It had that old charm: red carpet in the lobby, posters from the silent era, large prints of Mary Pickford, Charlie Chaplin, and Buster Keaton lording over the concession lines. There were only two screens, surrounded by rickety seats with worn cushions. Tickets were cheap. I’d spend Saturdays there seeing the double features. There was this guy I saw there, every time. He was about six and a half feet tall, seemingly more so with frizzy shocks of salt and pepper hair, hard to miss. He also always wore cardigans, even in the summertime, because that theater was generous with the air conditioning.

After the showings, I’d see him stumble out of there, like he was drunk on what was projected, intoxicated by the light that bathed the back of our heads. Pieces of popcorn were stuck to his sweater. There’d be at least a dozen, as though they were cotton balls sewn into the design.

One time I tried talking to him in the bathroom while we both relieved ourselves after some three hour epic.

“At least those chariot drivers didn’t have to worry about passing an emissions test,” I said.

He spoke but it was undecipherable. It was apparent he had half a tongue. Though his eyes seemed to burn with so many thoughts about what he’d just watched, and I wished there was an easy way to pull it out of him. I wanted to suggest he write movie reviews, but I felt like that would call attention to his inability to speak, and I didn’t feel like it was my place. I even checked the local papers, and searched online for reviews of the movies we saw, hoping to see a headshot of this man accompanying a columnist’s bio, but I never did find any to match.

He waddled, too, and once I knew he had no tongue, I often thought he would have fit right in before talking pictures became a thing.

One time, sitting near him, I could hear him sucking away on one of those little cups you could use to set aside extra butter, to later drip over your popcorn once the bucket was depleted halfway.

For most, he became periphery the more they saw him at the theater. Though for me, I found myself watching him more and more, paying closer attention to him than I did the movie. He could sense me too. He’d look back, lock eyes, and I’d avert my gaze, pretending I hadn’t been staring at him for twenty minutes.

He died one night in the theater while choking on popcorn. No one could hear his gasps for air over the loud shootout that took place on screen. We all thought he was laughing hard, not desperate for air.

I sometimes wake in the middle of the night and see him at the foot of my bed, watching me, as if it’s his turn to stare me down. He doesn’t look away like I always did. He’s rapt, like my cowering under the covers is the most exciting film he’s ever seen.

At first I thought I was only seeing him in echoes of my dreams, but I’ll step on a lone popcorn kernel, in the hallway, or the bathroom, or the living room, even though I’ve never popped the stuff at home. 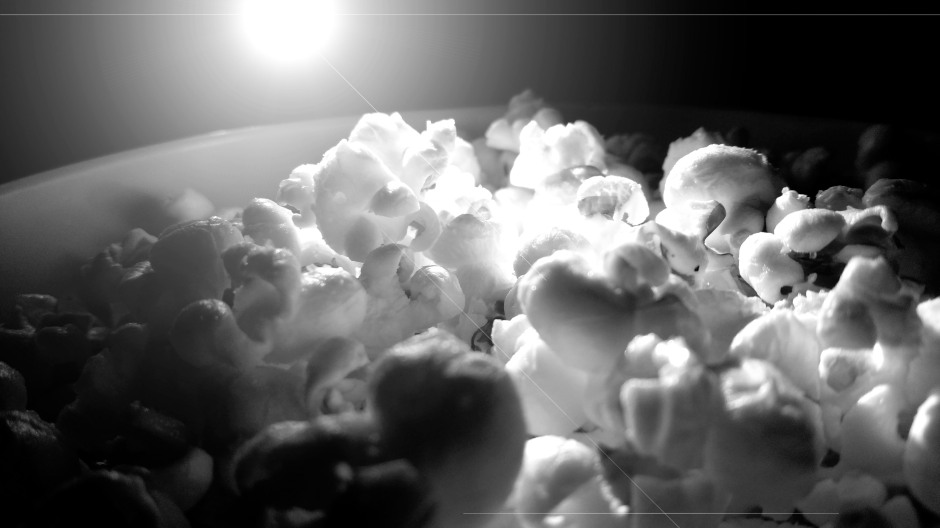