My father is a shy and quiet man.  Growing up, he and I weren’t close.  He didn’t quite understand my overly dramatic responses to everything.  We didn’t “connect” on any level.  The only time he generally spoke to me was when he was angry with me because I was arguing with my mom.

However, when I was 11, I was able to form a special secret bond with my father.  We did a very bad thing, and then kept the secret from my mother, and in my mind, the authorities.  This secret (which will now no longer be a secret) has bonded us together ever since.  To this day, we still talk about the time when we practically broke the law.  My dad still beams with pride, as if it was his crowning moment.  It’s a story I treasure because it’s ours.

Sunday was obligatory church day in our house.  My mother taught Sunday school, my brother attended Sunday school,  I sang in the children’s choir and my dad was a deacon or some such ranking official.   After church, my mother would stay in town and pick up greeting cards at the Hallmark store or refill prescriptions.  On this particular Sunday, my parents had driven separately to church so my father wouldn’t have to partake in card shopping. My brother was going with my mom.  I weighed my options and decided to forego shopping and hopped in my father’s pickup truck.

“We have to stop off at the shop.” my father said.

My father was the owner and operator of the town’s only garbage removal company, Waste-Away Disposal Service (“A Refuse You Can’t Offer”).  We didn’t have city-funded garbage service in our tiny village, and my father had trucks, employees, a shop/garage, offices, and he also managed the city dump.  As a child, I was always embarrassed of his work.  Kids would pick on me about being a garbage picker or “always having enough to eat.”   Later in life, I would come to appreciate the financial benefits to being the daughter of a “garbage picker” and have since been quite proud of my father’s business.

As we pulled up to the shop, I noticed two garbage trucks parked in front of the garage.  My dad immediately started swearing.

This was probably more words than my father had ever spoken to me, and the first time I’d heard him say the “F” word. I was alarmed.  As I climbed in the garbage truck, my father explained.  An angry guy who lived around the corner refused to pay his garbage bill, and had gotten upset with my father about the fee of $7.00 a month for garbage service.  After some yelling, he promptly cancelled his service with my father.  Then, the guy started sneaking his garbage over to the shop at night and throwing it in the back of the garbage trucks that weren’t parked inside.  He was, in fact, stealing from my father.

My father continued on to say the guy wasn’t terribly smart as he always threw away his mail with his name and address and was easily identified.  As we pulled up, he had noticed new garbage thrown in the back of the truck (not compressed) including letters and magazines.

“I’ve had 6 conversations with that guy about throwing his garbage in here.  I told him I was going to take him to court if he didn’t quit.”

I didn’t know what was going on, but I was quite afraid of how angry my dad was. I’d never seen that part of him before. I thought maybe we were going to drive over to the guy’s house and fight him.  I was truly scared of what might happen because I didn’t consider my dad a good fighter; he was too shy and nice.  My dad backed the full garbage truck onto the street and turned the corner.  We soon pulled up to a ranch style home with a sizeable front yard.  I could only assume this was angry guy’s house, but I was still completely unsure what my dad had in mind.

Instead of pulling into the driveway, my father swore a few more times and backed the garbage truck through the front yard, stopping precisely at the moment the back of the truck touched the cement set of porch stairs.  There were deep tire tracks in the grass and mud troughs had formed where grass once grew.  Crime 1: Destruction of Property.

I was only able to observe what was going on outside through the side mirror, but from inside the truck, I noticed my father pushing buttons and pulling levers.  Then I realized what was happening.  My father was dumping the entire garbage truck filled with trash onto the man’s front steps and porch.  This was all the trash that truck had picked up and compacted in a day.  This was much much more than angry man’s trash.  It was half the town’s trash!  As we pulled away, my father exclaimed, “I bet he doesn’t dump his garbage in my trucks again!”

I looked back as we drove off to see a mountain and a half of garbage propped perfectly in front of the house, piled high on the cement patio.  The wrought iron railing held it all neatly in place and the front door was no longer visible behind the wall of refuse.  Crime 2: Littering , Crime 3: Front Yard Invasion

I kept imagining angry guy walking out his front door in his bathrobe, bleary-eyed and searching for his Sunday paper, only to find a mountain of trash he would have no way of removing.  I imagined him taking a few seconds to realize who had done the deed and then calling the police to have us arrested.   My dad just smiled.  I think he was imagining the man in his bathrobe standing in a pile of garbage too.

Then, in typical father-form, my father said, “Don’t tell your mother.  That was probably illegal.”

In that instant, I knew I was special.  My dad trusted me with his illegal activities, and now I had something in common with him, a connection I’d never had before.  Although I was somewhat horrified of the whole incident, I was excited to have something to talk about with my dad when I visited him in jail. I also was secretly proud that my dad was such a badass.

We quickly drove back to the shop and got into my dad’s pickup and headed home. I was speechless and my father was too busy beaming to say a word.  When we arrived 4 minutes later, I didn’t look my mother in the eye.  I feared she would see the crimes written in my pupils.  I knew the police would soon be taking me away. Based on what I had learned about jail from TV, I determined I was an accomplice.  I’d most likely be going to jail for 10-15 years and my father would certainly get life.  I tried not to cry as I sat on the couch searching out the window, waiting for the police to come. I was afraid for weeks, always fearful when a car pulled down our street.

The police never came and my father and I kept our secret.  One day, years later he told me the guy started coming to the dump religiously after that and paid to dump his trash there instead.  He never said a word to my dad about the mountain of trash and apparently no witnesses ever put me at the scene of the crime.

Now, every time I bring up that story, my dad laughs so hard he cries.  He’s still so proud of the day he took down the man who stole from him.  He always finishes the story with, “he never did dump his trash in my trucks again.”

Then, he always says, between tears, ”I guess we really did have a refuse he couldn’t offer.”

I never did understand that slogan, but I too laugh until I cry just the same. 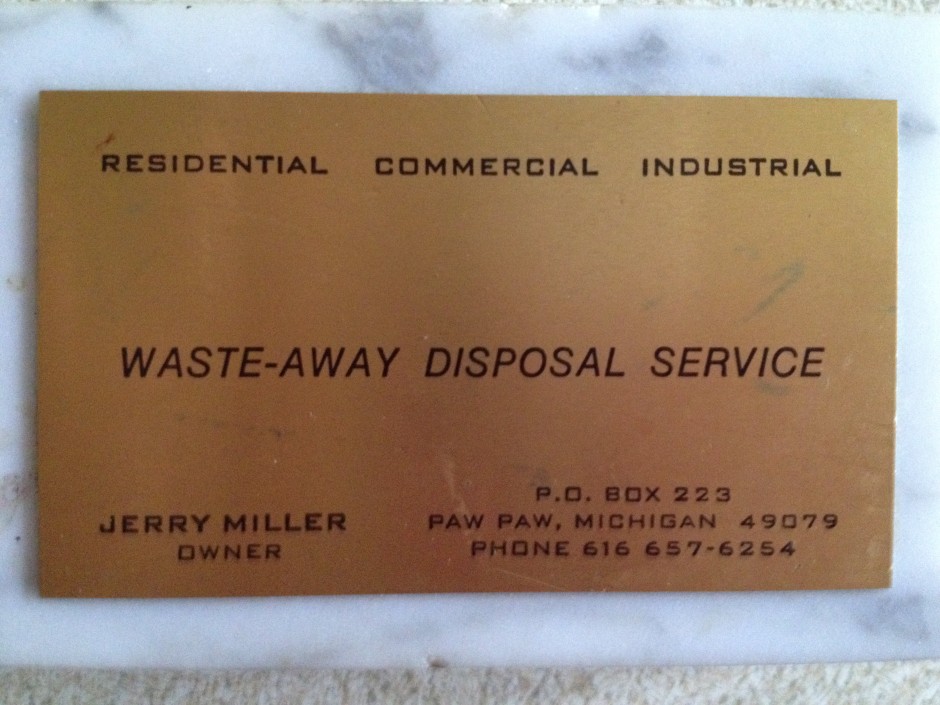