She fell in love with the road at an early age. For her eleventh birthday, Brandy’s parents decided to take her on a road trip to the Grand Canyon. Many kids her age would get bored during the long hours spent trapped in the backseat of the family station wagon, but she adored pressing her face to the window, drinking in the ever-changing landscape. During the return trip home, she sat in the way back. It was her favorite spot because she could lie down with her legs running up the backward-facing car seat, watching the upside down sky fly over her through the bubble of the rear window: red rock tops, wisps of white clouds, infinite blueness. It was prettier than any of the postcards at the Grand Canyon gift shops, and Brandy squeezed her eyes shut in hopes of burning the view forever into her memory while they drove back to Barstow.

Right after high school Brandy married her long-time boyfriend Parker, and he got a job at the power company. For the first few years, life was good. Brandy went to community college part-time and waitressed on the side, and when they both finished up at work, she and Parker hung out at the bowling alley or the bar with their high school friends. Not much changed about life after high school; they still drank the same cheap domestic beer (Keystone Light in cans), told the same old jokes (dick and fart), had the same kind of sex (missionary on the second-hand trundle bed).

After a few years, Brandy began to feel restlessness creep into the periphery of her daily life. She wasn’t necessarily unhappy, but she wondered if this was all she would ever be. She’d had no luck getting pregnant, and Parker seemed to be drunk more often than sober. Sometimes, she’d get into her old shitbox car and drive around aimlessly, as if hoping to stumble across the place she was meant to be. She figured she’d know it when she saw it. But all of Barstow looked the same, and the monotonous landscape did nothing to scratch the deep-rooted itch.

When she caught Parker cheating on her (she found another waitress’s fake press-on nail stuck to his boxer shorts while standing over a laundromat washing machine), it felt like a blessing for her to have a do-over. Parker begged and pleaded for her forgiveness, but she could no longer give him her heart. As she packed up her things into cardboard boxes, she gazed out the window and saw cars flying down the 40. The memory of her childhood road trip jolted her like static shock. The next day, she applied to trucking school.

Brandy was the only woman in her class. The guys gave her dirty looks when she raised her hand every time the instructor asked a question. She pored over her course materials until she knew them practically by heart, and was equally focused and conscientious behind the wheel. The day she got her Commercial Driver’s License, she celebrated by dining solo at the local steakhouse and treating herself to her first ever glass of champagne.

For Brandy’s first 14,000 miles, she was required to drive with a supervisor. She was assigned to Eddie, a squat, sweaty man who told her right off the bat that he didn’t think women should be truck drivers. For a full month, she silently deflected his crude remarks and insults, directing her focus on the road. Every time he insulted her, she’d sit ramrod straight like her spine was made of steel. It made her feel stronger, hardened to his vulgar presence. When he make lewd suggestions that they’d keep warmer at night if they shared the same bunk, she only gave him cold silence, staring out the window to remind herself that someday, this part of her journey would be done and it would all be just a memory. She could lose herself in the yellow center lines flying past her like lightning bolts, hypnotizing her into a state of calm.

After suffering through her time with Eddie, she got her first solo runs. They were short and unimpressive jobs, quick sprints through boring landscapes in inland California. She didn’t complain; each step of her training was slightly better than the last. She focused on making her deadlines, and time moved more quickly. As her miles racked up, Brandy started to land better gigs traveling over large swaths of the western U.S. Finally, the road ahead opened up for her.

There was nothing that she loved more than hauling out of a big city and escaping onto the highway; she’d watch the lights of civilization retreat in her rearview mirror until they were gone, extinguished by the dark velvet night. She rode her rig like a gladiator commanding a chariot, parting the seas of red clay dirt and asphalt gravel. Utah at night was like being on another planet; moonlight glowed on the rock formations and transformed the landscape into something otherworldly, and she gladly descended into it. She drove through snow-covered mountains, holding her breath when she saw the runaway truck ramps. She crawled through the desert in bumper-to-bumper traffic as the L.A. crowd made their hangover drive home from Vegas. She sat and waited for a never-ending herd of elk to cross the single-lane highway in Wyoming. In Montana, she saw a sky bigger than any she’d ever seen. She loved her life so much it almost took her breath away. Sometimes, she contemplated writing a thank-you letter to the waitress who left that piece of cheap pink acrylic on her ex’s Haynes. Time flew by as fast as the view outside her driver’s side window.

During a stopover in Denver, she met a man at a bar. He was good-looking, about 15 years older than her, and rugged in that Colorado-ish way; there was a bike rack on the back of his Subaru and a dog’s chewed-up frisbee on the shotgun seat. His name was Austin and he seemed to genuinely like her. They were such opposites; he was the CFO for a tech startup and buzzed around like an over-caffeinated honeybee while Brandy exuded the patience and serenity of a Nevada sunset. They clicked into place like puzzle pieces. Brandy called in a favor from a dispatcher whose ass she’d saved more than once on quick turn-arounds, and they pulled a few strings to make Denver her hub for the upcoming few months. She spent all of her time off with Austin. They went on long hikes and watched Netflix in his spacious ranch house. His lab mix Trooper would sleep with his shaggy head on her lap while she melted into the cushy leather sofa.

Months went by. Brandy balanced her relationship with Austin with her life on the road. More of her things accumulated in dresser drawers and cabinets in Austin’s house. Sometimes, when she was busy puttering around in his kitchen whipping up her famous potato pancakes, she’d catch Austin watching her with a tender expression. She hadn’t seen a man look at her like that since Parker during junior year. She spent more and more time off the road and in his house of floor-to-ceiling windows. Some days, she could stare out those windows for what felt like minutes but were closer to hours. Once, she saw a coyote wander into the large, unfenced back yard. It saw her through the window and their eyes locked. She stayed still, breathless, until it broke her trance and slipped away into the trees.

One day, Austin took her on a drive to Estes Park. Brandy fidgeted, as she always did when sitting in the passenger seat. At a scenic overlook, he pulled over the car and told her that this was his favorite view in Colorado. She walked up to the carved wood railing, drinking in the beauty of the scenery. Austin stood next to her and began to talk, as he had been doing quite often lately, of their future together. He told her that he missed her during her long treks away from Denver. She didn’t need to break her back hauling plungers and diapers across the country anymore, running herself exhausted on little sleep and fast food. He made enough money where she wouldn’t have to work; she could move in with him and Trooper and they could live a comfortable life together.

Brandy thought of the long hours Austin worked, and how there were days when she’d eat all three meals by herself while he took Skype meetings. She imagined what it would feel like to not have the road to look forward to. Her life would consist of making potato pancakes and waiting for him to come home.

She didn’t want to quit her job, and she told him. He went silent, then grew angry. He swore and pouted in frustration. He accused her of having no heart. She tried to reason with him; what was wrong with their current life? They had been happy until now. But Austin didn’t want to listen. He wanted to own more of her than she was willing to give to him.

She drove away from Denver, watching the city disappear in her rearview mirror. His words had stung, but the ever-growing stretch of road between the two of them soothed her like a balm. Of course she had a heart. But she also had diesel in her veins. The yellow center lines zipped past her, dots fading into dashes. She steered her rig away from him, and never looked back. 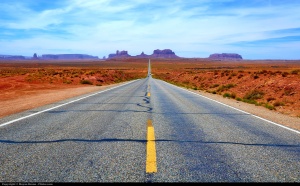