Before I can even begin to relate what it really means to be a pizza delivery driver, I need to manage your expectations and burst your bubble: the one story told by everyone who has delivered pizza is a total fabrication, a complete and utter lie. No one offers you sex in exchange for pizza.

In fact, no one barters for pizza at all. Let me put it another way: Do you remember that time you were working the register at Target when a customer strolled up and offered to fuck you in exchange for a pair of Merona pants? No, you don’t. It’s pretty much the same thing when you’re delivering pizza, except when you deliver pizza people give you tips. People will give you anything, and many things, as a tip – alcohol and drugs (often to be consumed at the door with the customer), blank video cassettes, Toys “R” Us Geoffrey Dollars – except for sex. Nope. No sex. Seriously, that woman your brother said answered the door as naked and broke as the day she was born, and then offered her moist vagina in exchange for a medium pepperoni pizza from Domino’s? It didn’t happen because pizza is not heroin.

You receive your tips under the stresses of a dizzying variety of environments that change quicker than the weather in Missouri, which is the actual state where I was delivering pizza. I delivered “St. Louis style pizza” at a suburban location of the premier metro area chain that rhymes with emos. For those of you who have taste, St. Louis style pizza is basically a giant thin white flour cracker soaked with a watery tomato meat sauce, piled with toppings of your choice, and then smothered in greasy Provel “cheese” – which according to canon is a processed blend of cheddar, swiss, and provolone, but I believe it to be man-made by boiling down discarded tire rubber in a vat of butter and the tears of a very obese man. It is gross and delicious. The chain I worked for also topped the whole works off with “pizza zest,” which was literally parmesan and oregano mixed together before sprinkling. In the mid-90s they did at least. They might not think people are that simple now, or at least realize our palates are not so easily excitable, but then again we are talking about a horrible style of pizza from a region known for deep frying pasta, which I fucking love by the way. 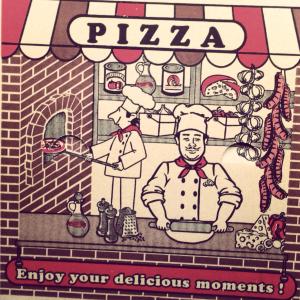 That right there basically sets the pace for how these stories will unfold. I delivered a shitty pizza that people love and I didn’t get laid for it, but I did have people yell at me a lot when they wrote checks because it was a very invasive and cumbersome process.

I delivered thousands of pizzas to hundreds of people for tens of stories. I intend to share them with you, piece by piece, in upcoming editions of…