I was doing laundry one night, and as I was leaving my apartment to switch my load to the dryer, I heard an elderly woman’s voice from down the hallway call out “is that you Jimmy?”

I replied “No, it’s your neighbor, I’m Jeff.” She looked like she was in her early 90s, shrunken and frail. I offered my hand in introduction. There was something that caught me off guard about her eyes. It wasn’t like she was blind. She seemed to see me, but it felt like she wasn’t quite registering me.

“I thought you’d be home earlier Jimmy,” she said.

“I’m not Jimmy, I’m your neighbor, Jeff. I live down at the end of the hall.”

“I don’t know. I haven’t met Jimmy yet. Is Jimmy your husband?”

I wanted to excuse myself so I could go finish my laundry, and then relax for a bit to recharge for the next workday, but she was hovering, anxious about Jimmy.

“What hours does he usually work?”

“I want Jimmy home.” She seemed scared. And because I felt like I couldn’t leave her until Jimmy came home, I myself became anxious for Jimmy to get his ass home.

“Mrs. Massey, do you have his number, maybe we can give him a call?”

It was clear she had some form of cognitive decline. Alzheimer’s, dementia, something was skewing her reality, and I even wondered if a Jimmy actually lived with her, if their cohabitation was just a shell of a memory that kept looping.

“Can you help me to the store? My cousin works there, Jimmy might have stopped by to see her.”

We had to make a quick pit stop in the laundry room, then I walked her down the street, following her directions, to where, as she said, her cousin owned and operated a convenience store, where Jimmy often got snacks. She initially told me it was two blocks away, but after two blocks, we hadn’t found it, then she said it was only a few more blocks. We walked for maybe ten minutes, and still didn’t find it.

“What’s the name of the store?” I asked.

The name was on the tip of her tongue, but slipped away. As we walked further, her confusion worsened.

She thought we had gone in the wrong direction. So we turned around and walked north for twenty minutes, then another ten, before she thought we should head west, so we walked in several loops. I asked a passerby if they knew of any convenience stores in the area, but they only knew of a 7-11 on Bryn Mawr.

I felt a rush of hope as we came across a corner store on Broadway, and her eyes lit up for a split second.  Finally we found the store and she’d be reunited with her cousin, possibly Jimmy, filling up on FunYuns and a hot dog, and she’d be in the hands of kin! But her eyes just as quickly clouded over.

We stood there, defeated, the corner store a haunting mirage, perhaps far in the past, flickering from a faint memory of a different town altogether.

Despite her age and condition, she had pep in her step and could keep up with a brisk walk long into the night. We’d covered plenty of ground, for long enough. I suggested we return to the apartment. Maybe at this point, Jimmy was home. I was also a little anxious about my clothes being handled and dumped on the lint-covered table by an impatient neighbor.

Throughout our walk, she continued to ask, “you know Jimmy, right?” And I continued to reassure her I did not, in fact, know Jimmy. On our way back to the apartment, her inquiries about my familiarity with Jimmy began to sound less like a question, and more like a statement. You Know Jimmy. Her confidence in my pre-existing acquaintance with Jimmy seemed to chisel at reality, propelling me further from my intended night of finishing up my much-needed-to-get-done laundry, relaxing in a warm tub, and getting to bed early. Frustration boiled, at her next utterance of “you know Jimmy,” I snapped. “No! No, I do not know Jimmy! I’ve told you this. How many more times do I have to tell you this?”

“I thought you knew Jimmy.”

She was quiet the rest of the way home. I felt crummy for yelling at an old lady with Alzheimer’s. I wanted to apologize to her, but I also wasn’t sure if she would even remember me getting snippy.

We rode the elevator up to the 5th floor and she opened up her apartment and called out to Jimmy. I could see a glimpse of her unit as she held the door open. The walls were undecorated. There was a twin bed up against a window, covered in what looked like plastic sheets by the way they reflected the hallway light. A sleeping bag lay rolled out on the floor next to it. Beneath it was a pile of blankets, for what appeared to be extra padding. There was evidence of a Jimmy after all, a saint, at his mother’s side as much as he could be, except when he had to work.

The elevator descended and returned with the man who lived in the unit next to hers. He was in his early 50s, a good mix between muscle and chub, with a big bushy beard to frame his smile.

He confirmed that she indeed had Alzheimer’s and lived with her son, Jimmy, who was working the night shift at a hotel and wouldn’t be home until later. He said this sometimes happens, she gets scared and starts to wander, looking for Jimmy. He thanked me for helping; he’d help her from here until Jimmy got home.

I was off the hook, both relieved and sickened by how ready I was to be free of that duty. I tried to take my bath, but only soaked in the knowledge that despite helping her try to find Jimmy, and the corner store, my mind had been screaming the whole time of how much I did not want to be helping; how I just wanted to be done with my laundry and in the warm tub that now only seemed to be slopping over with remorse.

A few days later I was on my way to work and a different old lady called out to me, “here boy, come help me!” She spoke with a thick, eastern European accent. She was short. She waddled; her hips were uneven, and her ankles were swollen to the thickness of her upper leg. Walking looked painful. She needed help getting to the grocery store. I was running late, but my guilt from the other night still lingered. I needed to swallow a tardy and help this lady get to the store.

I walked her toward Jewel at a snail’s pace, because each step seemed to jostle the fluid that swelled her feet, igniting a nerve pain I hope to never experience. She spoke of her plans for me. I was to help her around the store once we got there. I was to help her home, help her open canned goods and transfer them into small Tupperware containers. She listed off the goods; beans, peaches, corn, peas, soups, squash! 50 cents! 50 cents! 50 cents per can! She barked these out as commands, like I was a young kid desperate to earn a little money for candy. I tried telling her I didn’t have the time, I could help her to store, but I needed to get to work, but she growled and continued to lay out the conditions of the transaction. Help me open can of corn, 50 cents!

I finally got her to Jewel and once again I felt the impulse to dump her into someone else’s helping hands. I found a stock boy and asked him to help her find the things she had on her list. He didn’t say anything, but stood there, bright-eyed, ready to assist. Then I was off to work, karma uncleared, but in my head I promised to display my goodwill, and commit to it, on a more convenient day down the road.

The essay above is a newly revised version of You Know Jimmy, previously published on Drinkers With Writing Problems in March of 2016. 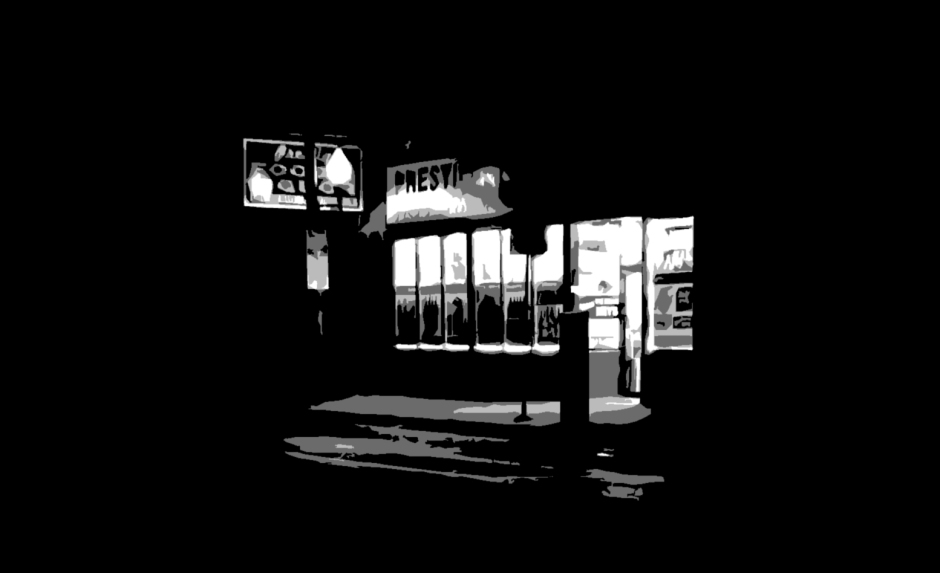