[This excerpt is from a piece I read for the “Truth or Lie” live lit/storytelling show in Chicago on August 3, 2017. It was absolutely thrilling to read at this show because I challenged myself to write a “lie.” I was super nervous, but had done a ton of research, and went through several drafts and discussions with fellow writers about this piece. Thank you to everyone who helped me shape this piece into what it became. I convinced approximately 18 out of 20 people that this story was true! I highly recommend that if you are interested in reading at this show to reach out to producer Sarah Bunger. It is a really good time. Also, there’s free booze.] 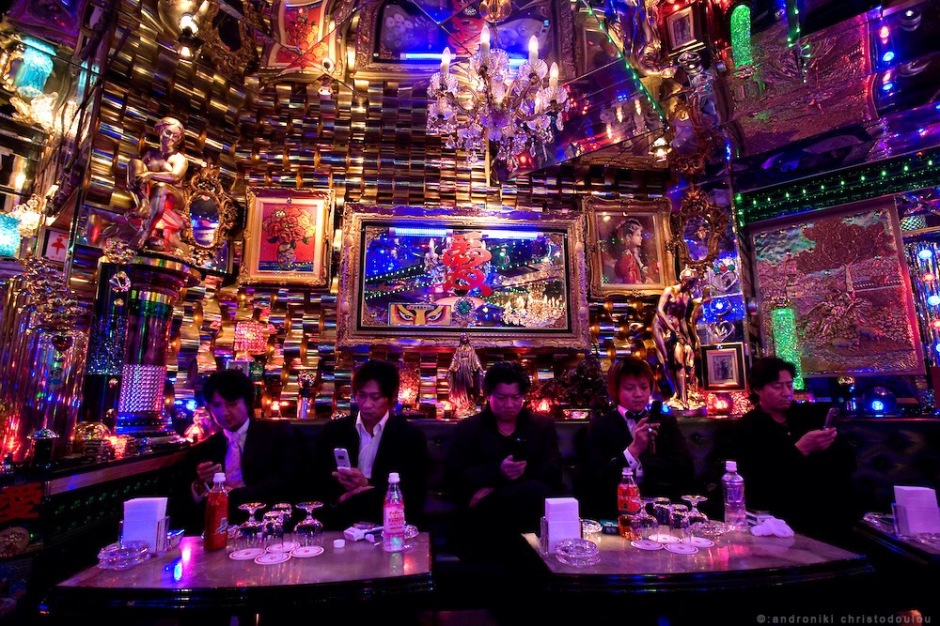 The night had finally arrived for our adventure. We dressed in our finest attire and headed to Kabukichō, the red light district of Tokyo. It was beautiful and overwhelming, beaming with lights and echoing with the sounds of people in its small, chaotic streets. We were excited to experience what we had been anxiously waiting for months.

When we got to the front door of the club, we were asked to turn in any cameras and then we were led through a red velvet curtain. We entered a low-lit room like an old school jazz club. There were semi-private booths, enclosed by tinted glass, and above the wall next to the booths were flat screen televisions with karaoke lyrics on them. We were greeted by three host boys: one who was the regular host boy of our guide and two that were there for us. They sat with us and ordered a bottle of whiskey. They made a show of pouring us drinks with soda water, whiskey, and perfectly square ice cubes. We sang and the night got progressively blurry.

On one trip out of the bathroom, while my host was waiting for me with a warm towel to take me back to the table, I noticed another host waiting for someone. He looked oddly familiar. Then I realized that it was Hakaru. He looked so different than the young college-aged student I had meet just a week before. His hair was teased wildly and he was covered in silver crosses. He turned to me and politely asked if I’d be willing to walk down the hall with him for a little bit. My host boy seemed confused but willing to wait for me.

He said, “I would like to ask you if you would not speak of this to my parents. They do not know.” I realized he had more to lose than I.

We both said our goodbyes when we noticed a woman coming out of the bathroom impatiently waiting for him.

Before I got back to the table, I felt a tension mounting that I hadn’t felt before. As I reached the table, I noticed that our guide was gone. Apparently, there was some rivalry between our guide’s host boy and another boy that we had not met or seen at the club. We were both starting to feel tired from the many whiskey sodas we had downed. We also suspected that we were grossly over budget. A few minutes later, our guide came back to the table in tears.

“Eiichi is in an argument with another boy in the kitchen but I’m not allowed back there and I do not know what to do.”

“Maybe it’s time that we leave.”

“I don’t want to leave without Eiichi.”

Sayaka dismissed our host boys with a handful of yen that I can only guess was enough to pay for most of the bill. We convinced her to come to the bathroom and clean up her makeup a little bit. On our way, I caught Haraku’s eye and waved him over. He was hesitant until he saw Sayaka crying.

“Are you okay?,” he said as he approached us in the hallway. Sayaka looked at him in surprise. “Hara..” She let out a torrent of words at him as he nodded. He looked around and silently motioned for us to follow him. He led us through some hidden double-doors that led into the kitchen. It seemed that whatever happened there had died down and it was eerily empty and quiet.

Finally, we reached an outer door that led us to a dark, dank alley between buildings. We saw Eiichi pacing and smoking a cigarette, running a hand through his spiky hair. Sayaka yelled at him but they hugged and we all swore ourselves to secrecy with some bows and intense eye contact as Haraku disappeared back into the club and we all headed back to our own hotel rooms in silence.