It can be incredibly difficult to get your parents to provide a spit sample. My siblings and I purchased the Ancestry DNA kits for them as a Christmas present, but it took until May for my mom to finally send in her sample. As of this posting, my dad still hasn’t done it, despite the fact that both of them told us they really wanted to learn more about their ancestry. When asked why it’s taking so long, my dad shrugs and replies “It says you can’t have eaten or drank anything in the last half hour. I need my coffee right after I wake up!” This tidbit alone likely tells me much more about the genetic traits I have inherited than any spit test could. 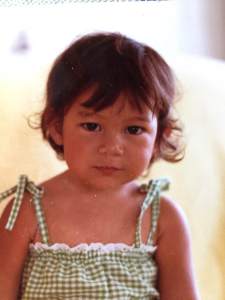 My mom was born and raised in the Philippines. My dad is a native of Skokie IL, and of Swedish and Irish descent with light blond hair and blue eyes. For most of my life, people guess that I’m from a mixed background, but they are never exactly sure what I am. I kind of love to make people guess, and I should add a disclaimer right now that as a general rule, you should probably never ask someone “What are you?” but I secretly love it when people ask me. Mostly because I’ve heard such a wide range of answers ranging from Hawaiian to Native American to South American. On a regular basis, strangers start conversations with me in Spanish, and I always feel guilty for letting them down by not being able to reply. Though if they spoke Tagalog, I wouldn’t understand it either unless it was the word for “butt” or “smelly feet.”

I’ve always defined myself as Asian/mixed race. But, I sometimes question my own identity–am I a person of color, or am I not ‘enough’? If I call myself white, am I dismissing half of my heritage? Biracial kids often find themselves on this weird tightrope, especially when their looks or skin tone veer strongly in one direction or another. My sisters, brother, and I all ended somewhere on the ethnically ambiguous spectrum, like a stock photo of a business meeting. My brother and I take after our mom: dark-haired and swarthy, while my sisters are blue-eyed like our dad, and my middle sister is so fair-skinned and light-haired that when she was a baby, if my mom was holding her while answering the door, people assumed she was a housekeeper.

When I was a kid, I attended a small Catholic grade school where most of the kids were Irish. It was like going to a school full of Weasleys and Malfoys, with maybe a few token Cho Changs per grade. Every year around St. Patrick’s Day, our school hosted a performance by a local school of Irish dance. I’d watch the girls my age dancing with their arms held straight and firm at their sides, their blond or red ringlets bouncing and their Celtic capes swirling. I wanted to take Irish step dancing lessons so badly. It wasn’t just the dancing and the outfits; it was the way that they all moved as one perfect, graceful unit. Their expressions were serene, their velvet hair bows never out of place atop their golden heads. They were the pinnacle of what I wanted to look like, instead of standing out among like a sore thumb. My light-haired, blue-eyed younger sister looked just like the Irish step dancers. In addition, she got to look like every female character on TV. This was the early 80’s, and it was all about Heather Locklear levels of blondness. My sister got to be Rainbow Brite, She-Ra, and Barbie, while I was relegated to Shy Violet, Catra, and a background Rocker. (In retrospect, Catra’s outfit was way more bad-ass than She-Ra’s).

Later on, as an adult, I worked in a large downtown office building, and the management company invited a troupe of young Irish step dancers to perform in the lobby for St. Patrick’s Day. I stood watching, off to the side, while the building concierge passed out shamrock-shaped cookies to the crowd. Among the blond and redheaded 8-to-12-year-olds, there was an Asian girl. She was focused and poised, her small feet flying and slapping the polished marble floors in her soft dancing shoes, in sync with the rest of the troupe, her black hair bouncing on her shoulders. My heart swelled with joy seeing her live my childhood dream (I still want to take Irish step dancing classes, fyi).

Around this same time, Ancestry DNA tests started to become a thing. My mom was especially interested in taking one because my two sisters both have blue eyes, a recessive gene. The Philippines has a heavy Spanish influence (thanks Magellan and colonization!) so we came up with theories in the family as to our exact mix of Spanish, Chinese, and Malaysian on our mom’s side. I started to theorize about how much our ethnicity makes us who we are. There’s something kind of romantic about it, imagining our modern lives as the culmination of generations going back to some distant Motherland, where our ancestors tilled fields and hunted direwolves with bows and arrows and that’s why, 300 years later, I tried archery once at my sister’s summer camp wedding and got a bullseye after drinking 3 PBRs.

Six weeks after mailing in her vial of saliva, my mom got her results back: 71% Eastern Asian, 26% Polynesian, and less than 1% European (basically the margin of error amount). I was surprised. I mean, I did cry during Moana, but I’m not a fan of beach vacations and I despise subtropical weather. Maybe I’m putting too many expectations on what ancestry means, probably by reading too many Outlander books.

My dad still hasn’t sent in his test sample, and part of me secretly wonders if his results will be the key to my identity. We know which generations came over from Ireland and Sweden, but we don’t know much going further back. When I travel, I’m drawn to cold northern places instead of the tropics. Maybe I’m descended from tough Viking stock, explaining my ability to tailgate for hours in 20-degree weather. Though most likely, my descendants have been passing out in Irish pubs since the beginning of time, a tradition that continues with the current generation of Nelsons. I still wonder what parts of my DNA were predetermined–maybe a distant Irish relative was a storyteller, which gave me my love of writing. Or maybe the ingrained love of music and dance on my Filipino side explains why I adore Bruno Mars (also half Filipino!). Or is it weird that I seek explanations instead of taking credit for myself?

But at the end of the day, my true identity is simple: I’ve eaten deep-fried Snickers, I own a Snuggie, and I’ve seen Britney Spears perform in Las Vegas: I’m definitely American. To be more specific, I’m a Midwesterner and a Chicagoan. My pride for this region and this city is a huge part of my identity. It’s a very human thing to want to define and express who we are, and no one thing can or will ever define us. While I may not love tropical beaches, I love my mom’s chicken adobo and halo halo and the guy who replaced Steve Perry in Journey. I’m a little bit pinoy and a little bit Viking (maybe–I’m still hoping for that test result). I love summer thunderstorms and Irish step dancing and drinking beers in the Lambeau Field parking lot while wearing a Bears jersey. I say ‘pop’ and ‘gym shoes’ with pride. And if you want to be really definitive about it, I believe firmly and deeply with every cell in my body that putting ketchup on your hot dog is a goddamn crime.