There is a spot midway down an alley between two granite skyscrapers where the high noon heat causes convection; and when a pane of broken glass, resting on a fire escape above a dumpster, directed the intensity of solar beams, an overflow of rubbish burst into flame.

This particular heap was all ashes in a matter of minutes, but the drifting dust and its sour brand of a stench soon settled on and stirred the attention of other crammed and chaotic dumpsters. Garbage that never much considered its own existence shifted and grew anxious. While the malcontent perfume made some cringe, for this group it was intoxicating. Unlike the first blaze, a slow smoldering was ignited, and the garbage puffed up into the air and screamed for collective notice.

Down the line, alley to alley, as though an infectious baton were being passed on, receptacles awoke to their own potential to be poster boy for the city’s atmosphere.

The dumpster behind the bistro filled up once again, was riled up by the stink it had itself instigated, and knew its proper place to claim ownership over what it had started by fostering new belches so foul that city workers wouldn’t be able to get close without gagging. Even the rats, who were initially drawn in by the smell of something charring, spun away once their whiskers singed. The other dumpsters bathed in its offering, became drunk, and reveled in their growth in size and number. It didn’t take long for the urban population to scatter, surrendering to the garbage garrison that had the guts to take the city back.

The garbage enjoyed the rush that comes with the abandonment of apology. Such heat even caused taffy to melt and bubble and rise up like a party balloon. A partially gnawed turkey leg, with three week old linguine draped over it, like a mop of untamed hair, was trapped inside this happenstance blimp, and took this opportunity to praise what is perishable and putrid, as would a proud brand ambassador gunning for a promotion. Chunks of green meat on the face of the drumstick flapped from the roasting below, allowing the new head to make its statement through a miracle mouth to further stoke the garrison’s ambition. An anthem roared from the burn at the base of the bone: “We are not to be held back by the condescension of pinched noses, we are a mess because they were a mess! They’re a nasty breed, unwilling to embrace their own shadow, until the offshoot can bark and bray and blow acrid swells. We have no choice but to recognize our forgotten right to sprawl in the roost! What makes us clear winners is that if you close your eyes you will still very much know that we exist!”

As the taffy bubble popped and the turkey leg fell back into a stirring of sparks, a stained cardboard pizza box, with beady, crooked and crusted black olive eyes, took its turn at the pulpit. The lid opened and closed, opened and closed, to punctuate the biting cackle that could be heard in all corners of a metropolis muffled by smog.

“If you don’t bow down and breathe us in fully, then you don’t belong with us! Get out, get out! Or we’ll be glad to bake your sickly smooth skin into the scraps it outta be!” Shrieked a chorus of pulverized crab claws, engulfing the air around them with the same suffocating mist as a polluted bay.

A city vacated no longer replenished the rank of the rot, and while the garbage administration enjoyed a momentous command, in a matter of months it ran into challenges against its own sustainability. Stale brioche buns fused to become a weighted blanket which snuffed some embers. Ash rained down, an unpredictable tempest, smothering an entire dumpster’s seemingly unquenchable spirit. When winter dried out the rancid sauces, and the intensity of the wind swept away what lingered, the once thriving population of rubbish shriveled. It had no choice but to accept its place as a relic. But beware, relics have the capacity to unleash a wild yearning to be recycled at a future date in time. Note the slip of wax paper that once hugged a jelly donut. Now it sails, coasting on a current through the clouds, and will any day drop down in a different city, maybe even one on the other side of what seemed a vast, untraversable body of water. And if it tells its tall tale, boasts a complete comfort in the stickiness of its unceasing grime, a simple whiff of this can knock down new dominoes. 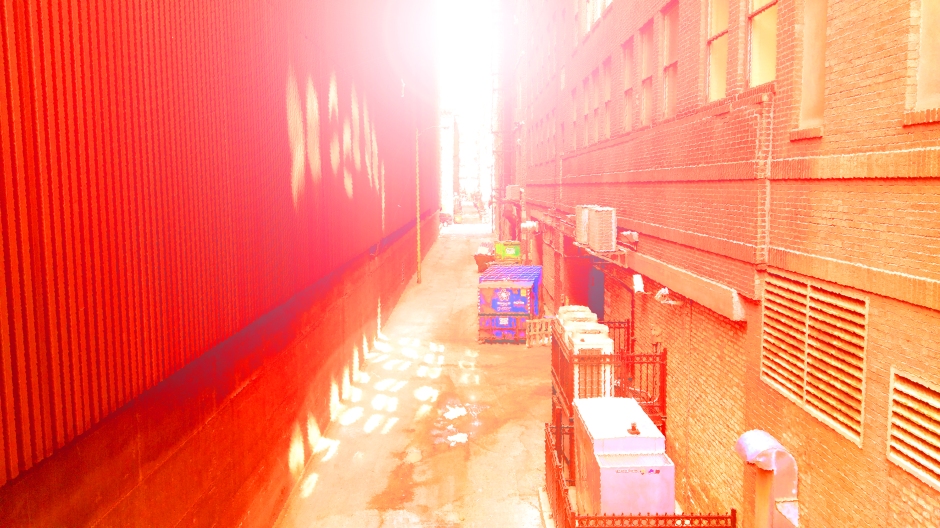