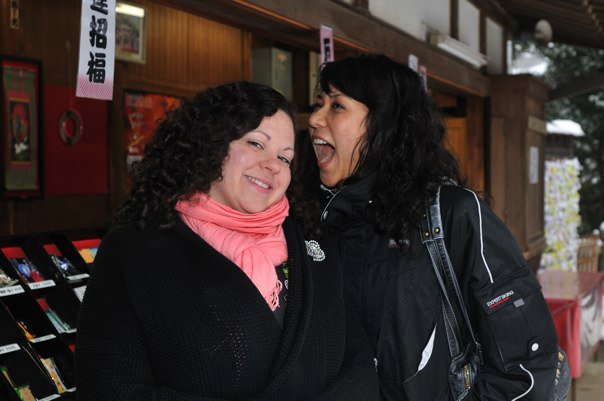 On March 11, 2011, in a shaking hotel in downtown Tokyo, I found out the real meaning of “being down”. I had been selected as part of a program with Rotary International where six Chicagoans were given the opportunity to live in Tokyo for a month, all expenses paid with a tiny daily stipend.

During that time, we dined on sushi, ramen, and tonkatsu. We visited the magnificent mountains of Mt. Takao. We were attacked by snow monkeys and blessed by monks. We bathed in onsens and fell asleep to Sapporo and sake swishing in our bellies.

The best part of this trip was that I was lucky enough to share these experiences with my closest friend, Anita. It’s unfair to call her a friend. Anita is my sister. She’s my family. From the day we met, we knew we were part of the same tribe. She helped me build a roller derby league, she supported me through a divorce, she is tía to my children, and I can’t count how many times she has fallen asleep on my couch after too many bottles of red wine.

We stood in the lobby of the Hyatt, admiring its marbled walls and crystal chandeliers that must have been 20′ long. Our Japanese Rotarian host were going over our schedule for that day: go to our rooms, relax, shower, get dressed, and then at 4 pm meet in the lobby where they would take us to our farewell party. We were all escorted to our rooms by thin Japanese bellmen with jagged haircuts. I didn’t know where Anita’s room was, but I knew she was on my floor.

In my room, I took off my clothes and decided to check my email before I showered. I noticed that the water glass on my desk began to shake then slowly begin to tap. I heard the clicking of the pull chain against the light bulb in the lamp. I looked at the windows and noticed that they began swaying from left to right, then right to left and that’s when I decided to run.

I quickly slipped into my tennis shoes and I grabbed a white terrycloth robe from the closet. I flung open the door and stuck my head out to yell “Anita!” when I noticed another head sticking out from the other end of the hall screaming, “Elizabeth!”

We ran toward each other. We eyed each other over to see if there had been any major damage to either of our bodies when I noticed she was in the exact same robe, but her shoes were missing. In typical Anita style, however, she did accessorize by carrying her vintage red vinyl clutch purse.

“What do we do? Should we take the elevator?” Anita said in a panic. I had never been through an 8.9 magnitude earthquake but I knew I didn’t want to die in an elevator so we agreed on the stairs. Anita and I ran through the hallway feeling the floor shift under our feet. When we hit the stairwell, we rocked from left to right as the building jolted. We grabbed onto the railing to gain some stability, but the only thing I could think about was that it was a long way down from the 14th floor.

Between the fun house stairs and running in a spiral,I became very dizzy and wanted to stop, but Anita cheered me on, counting the flights as we ran, “Ten! Nine! Eight!”

Once I saw the plaster come down from the wall, I grabbed Anita, screaming, “Let’s go!” and left the woman behind.

When we finally hit the ground floor, we felt relieved at the sight of our team and our friends. The room was filled with people holding each other, crying, and staring at the chandeliers swinging violently. Anita’s face went white and she looked me in the eye and said, “I don’t want to die.”

Without breaking, I said, “We won’t. We’re going to be fine.”

Unfortunately, Anita’s the type of person who loves research and opinions so all my fauxstrength was undermined by our favorite Japanese Rotarian, Kumachen. When Anita asked Kuma if he’d been through earthquakes like this before, he replied, in his soft 60 year old voice, “No. This is worst.”

When things began to calm down, the aftershocks came. Each time a little shorter and slightly less intense, but no less scary. Outside, the roads closed and the trains shut down. The Japanese Rotarians began to whisper to each other and make phone calls. They gathered around and had obviously made a decision. Kumachen checked his watch. He looked at me and Anita. As another jolt hit the lobby, Kuma smiled and said, “Well, it’s time to go.”

Kumachen walked us to a set of escalators that ceased moving and gestured in their direction, “In the basement.”

“IN THE BASEMENT!!!” Anita and I exchanged glances that said “No fucking way!”

Kuma reassured us once more that we would be ok and claimed it was the safest place to be. I looked at Anita. I looked at the escalator leading three floors down. I took a moment to wonder what kind of bullshit Kuma was feeding me. I took a moment to think about my daughters and my husband in Chicago and I really wanted to call my mom. I quickly imagined our impending death- the rubble, the digging out of bodies, the reporters, and then, I looked at Anita again and saw that she was about to unravel.

I especially felt bad because I had been the one to convince Anita to come on this trip. Now we stood looking down at the black stairs leading to our fate. Anita and I must have had the same thought at the same time which was that if we were going to die, we were going to do it together. My hand slipped around Anita’s. Then we began our descent.

Through the rest of the evening, we greeted the Rotarians that made it to the party. They laughed at us in our robes. A cake was presented to someone on our team because it was her birthday. We watched more Rotarians enter the party room after walking for hours and occasionally breaking down in tears or frantically trying to call someone at home who would just pick up the phone. Then they would pull themselves together and join in our celebration.

Outside our room, in a waiting area, I could see people gathering around a television. Though, I couldn’t see the tv, I could hear the fear and concern in their reactions. Later I found out they were watching news reports about whole towns being swallowed by atsunami.

Then, the karaoke began. Anita interrupted my thoughts by suggesting we sing. I refused. She asked me again, and as siblings usually do, I gave in and agreed. We grabbed our mics, climbed onto a small stage, held each other’s hand and listened to the quivering walls as we shakily sung, “Ob-la-di, ob-la-da…Life goes on…”