1. It was a dark and stormy night, and Belinda was curled up on the couch Googling images of eczema on her phone.

2. What follows are the authentic and unabridged transcripts of the weekly conversations that took place between Chi-Chi’s manager Rick McFadden and his psychologist between 1980 and 1989.

3. Nina trembled with excitement at the thought of running her fingers through Angelo’s flowing chestnut locks and pushing her ample bosom up against his chiseled pectoral muscles, although since she was in jail serving a sentence of 45 to life with no chance of parole, the odds of that ever happening were very slim.

4. “During the past 16 days that we’ve been stranded in this train tunnel, we’ve delivered and then eaten a baby, incited a grandmother to a violent assault with a fashion scarf during the creamy or chunky peanut butter debate, and managed not to kill Joel for interjecting every conversation with That being said, and you decided that NOW was a good time to mention that you have dynamite in your messenger bag????” Kelly yelled.

5. Phil and the other surviving members of Technophobes For a Dimmer Future (TFDF) were determined not to let the near-apocalyptic nuclear disaster go to waste and immediately re-launched their marketing strategy with the new tagline We told you so.

6. Once upon a time, in a gentrified pocket of the city, a moderately attractive research analyst with an inflated sense of beauty due to the well-intentioned flattery of family and friends, whose boss was intolerably condescending, and who was feeling increasingly irritable in response to a slow Internet connection, potholes and unenthusiastic servers at her favorite farm-to-table restaurant, vowed that she deserved to be happy, damn it.

7. Terri’s husband confessed to killing her after the detectives confronted him with the DNA evidence, but it all began fourteen years ago when they met at a poolside bar; at its heart, this is a love story.

8. In the twenty-six chapters that follow, I will provide compelling evidence for the argument that Fidel Castro was a misunderstood but enlightened leader who truly embodied the transcendental ideals set forth by the great American writer-philosopher Henry David Thoreau.

9. The fact that you bought this book (probably after much indecision) indicates that you have very little self-esteem, are riddled with fear and anxiety, and spend most of your time wallowing in self-pity and self-loathing; fortunately I am here to tell you that you don’t have to live like that, and if you do everything I tell you to do you will transform so completely that you won’t even recognize that pathetic loser in twelve months time!

10. All I really need to know about sex I learned in kindergarten. 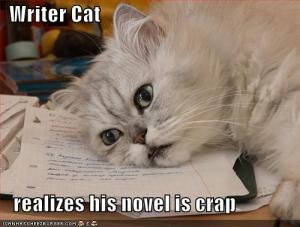